Hey. So, LightTrail is a trail system I made because I needed the functionality of a trail / ribbon, but I couldn't find anything for Blender 2.6. It's not exceptionally well made, but I'm happy with it. 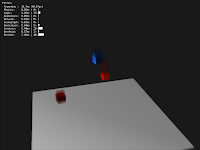 Hello! It's been awhile since my last post. Here's an example module that I made for motion blurring.

Hey. So, here's a little video in the "2D in the BGE" tutorial series that I've been making. This one just basically talks about refactoring your code to be easier to read and work with. Check it out after the break below.

Hey. So, here's another version of my BlendSling launcher. This one uses Blender 2.66a's BlenderPlayer. I've also uploaded an OS X version. As a side-note, the Linux versions were created on Windows, so they may or may not work. Feel free to give 'em a tug and see if they fall apart.

Hey. So, I thought it would be a good idea to make a central Google Code page for my BGE Python modules. That way, it's easy to make sure that you have the most up-to-date scripts and functions.  You can use an SVN tool like TortoiseSVN to download the latest versions and keep up to date. It's pretty slick, I think.

Hello! So, after quite awhile, I got around to making another pixel art video. This one is about outlines. You can find it after the break (hit "Read More >" below if you don't see it). 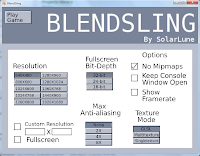 Hey. So, I renamed the launcher to BlendSling, as there had already been a 'BGLauncher' that launches BGE games before. This version adds a little safety to the launcher by adding in some (very, very, poor, but functioning) encryption to BlendSling from my BlendCrypt project before. What's more, thanks to a suggestion by Moguri from the BlenderArtists forums a few months ago (I was really slow to work on it for some reason), it doesn't decode the files to disk (like BlendCrypt did), but rather decodes them into memory, loading their scenes (and so everything in them) into the game via LibLoad.

Hey. So, I ported (or at least tried to port) the bgLauncher to Linux. I don't have a 32-bit version of Linux, so I couldn't test that version, but the 64-bit version seemed to run alright, though you can't spawn a terminal from it, so the "Keep Terminal Open" option is useless. Also, it would appear that you can't change the full-screen resolution - it will always be at desktop resolution (though that might be something to do with Linux or my graphics card and driver moreso than the BGE). Both versions of the launcher are present in the download. It requires 7-Zip to unzip. It can be found on the bgLauncher post here. Have fun!
Posted by SolarLune at 1:40 PM 0 comments 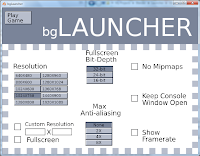 Hey. So, I made a launcher for BGE games, something like Unity's launcher. It basically is a standalone executable that will run a blend file named game.data or game.blend that's in the same directory as the launcher, and with the command-line arguments that you specify (no mipmaps, specific resolution, fullscreen, etc).

Hey. So, I made a template for simple movement with linear velocity awhile ago, and while it was alright, I made a new version that's a bit more refined. For one thing, it ties in better with the Bullet physics engine, and so won't operate separately from it.

For example, I'm pretty sure my old template wouldn't work well with bumping into objects, as it kept it speed separate from Bullet's speed values. The new version adds and subtracts its speed from the object's built-in linear velocity values, so if you go from bumping into an object to suddenly moving forward, you won't launch forward extremely fast.

Anyway, check it out here.

Hello. So, it's been awhile, unfortunately. Today I made and uploaded a pixel art tutorial video - this one deals with shading objects with more saturation the darker they get, and shifting the hue of colors as the shading gets darker. You can find the video after the break.

Hey. It's been awhile since I've last released a version of BGHelper, but I've been working on it quietly for my own projects.

Hey. Here's another part to the 2D BGE video tutorial series that I started earlier. This part goes into movement, animation changing, mirroring the sprite based on facing, and other things.

Hey. So, I thought I would write up a little something on classes in Python.

Voxels in the BGE Demo

Hey. So instead of working on my games or tutorials, I messed around in the game engine, heh. This time, the subject that I was interested in was voxels. I tried to use them before, with pretty poor results, as I couldn't get a large number of voxels to render in the BGE. Well, I then had an idea, which I tried to implement into the BGE, with pretty good results.

I Wish to Donate to Fund More Stuff for Game Up!

Search Game Up and Related Blogs